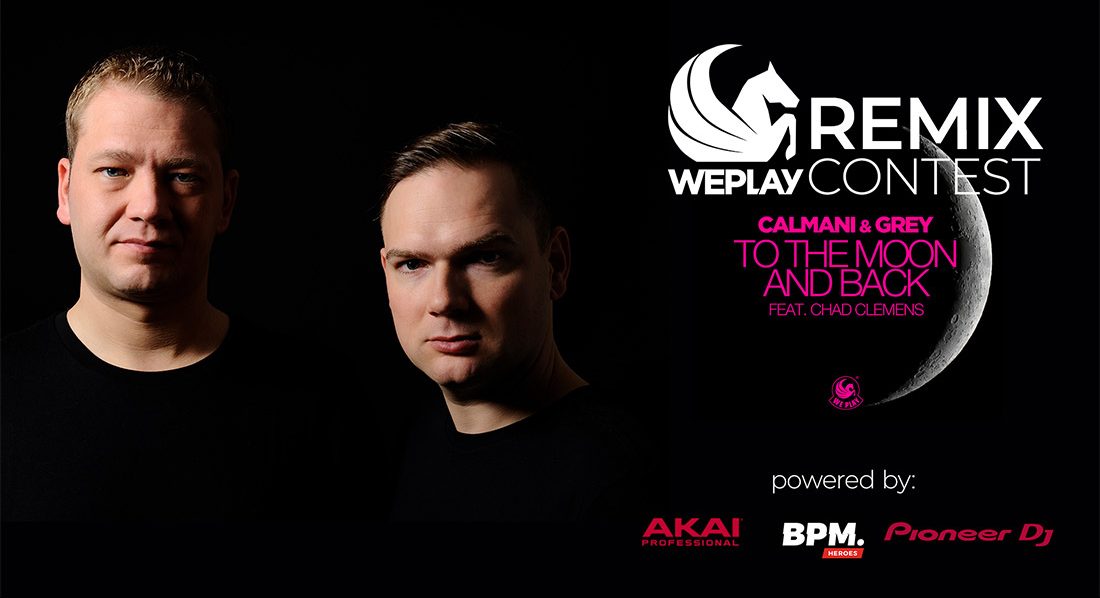 These Official Rules govern your participation in the Calmani & Grey – To The Moon and Back remix contest hosted by WEPLAY Music. Participation in the contest constitutes your full and unconditional agreement to and acceptance of these. So, it is important that you read and understand them.

Summary of Material Terms.
As provided in greater detail in these Rules (and without limiting the express language of these Rules), you acknowledge that you may not use any third party’s content in your Entry unless you have the express permission of that third party or the content is in the public domain.

The contest is run by WEPLAY Music, headquartered at Apostelnstraße 19, 50667 Cologne, Germany.

Eligibility.
The contest is offered only to natural persons at least 18 years of age and at least the age of majority in the person’s jurisdiction of residence as of the date of entry.  If you are the parent or legal guardian of a child between the ages of 13 and 18, you may enter the contest on behalf of your child, in which case (i) both you and your child will be considered “you” for purposes of these Rules, and (ii) you are solely responsible and liable for ensuring your child’s full compliance with these Rules. Employees, independent contractors, officers, and directors of WEPLAY Music, its respective shareholders, agents, representatives, affiliates, subsidiaries, advertising, promotion and fulfillment agencies, and legal advisors, and the immediate family members and persons living in the same household of such persons, are not eligible to participate in the contest.

How to Enter.
To enter, create a remix of the song ‚To the Moon and Back‘ by Calmani & Grey which uses the remix stems provided by WEPLAY Music. Entries must be sent to remix@we-play.cc with the subject ‚To The Moon and Back Remix by „YourArtistName“‚. Please provide us with a PRIVATE STREAMING link and a 320 kbps mp3 DOWNLOAD link!

Permitted Materials.
You may include in your Entry the following materials: music you create yourself, material in the public domain, and/or other material for which you have express permission to use and license in accordance with these Rules. By submitting an Entry, you represent and warrant that the content in your Entry is remixed by you. IF YOU USE CONTENT THAT YOU ARE NOT AUTHORIZED TO USE, YOU ARE NOT ENTITLED TO ENTER THIS CONTEST AND YOUR ENTRY WILL AUTOMATICALLY BE DISQUALIFIED BY WEPLAY AND NOT CONSIDERED BY THE JUDGES.

Qualification.
You may enter multiple times, but each individual or group entrant is only eligible for one prize. To be eligible for a prize (described in Section 9), an entrant or group of named entrants must comply with all provisions of these Rules. WEPLAY Music reserves the right to ask you for evidence of such compliance, especially with respect to Section 5.b. WEPLAY Music reserves the right to evaluate each Entry’s eligibility under the Rules as well as for compliance with the U.S. Copyright Act and any and all other applicable laws. Entries may be disqualified from the contest at WEPLAY Music’s discretion.

As determined by the WEPLAY Music staff at the end of the contest, 3 of the submitted projects will receive the following prices:

All prize expenses and/or services not specified herein are not included and are the sole responsibility of the winner(s). No alternative prize, cash equivalent, or other substitution is permitted except by WEPLAY Music, at WEPLAY Music’s sole discretion, in the event of prize unavailability. Prizes are nontransferable. All federal, provincial, state and/or local taxes are the sole responsibility of the winners.

All grading decisions are final. WEPLAY Music may disqualify any Entry that is, in WEPLAY Music’S discretion, inappropriate, offensive or demeaning to WEPLAY Music’s reputation or goodwill, or contrary to WEPLAY Music’s mission or these Rules. Once the grading of the Entries is complete, WEPLAY Music will notify the winners via email using the information submitted by the entrants in their email. If a winner fails to respond within 14 days of the date of the notification, that winner will be disqualified and the next highest scoring remix will be selected as an alternate winner for the applicable prize and notified according to this procedure.

Indemnification. By submitting an Entry, you agree to indemnify, defend, and hold WEPLAY Music harmless from: (a) any and all claims, demands, causes of action and judgments (including attorney’s fees, court costs and expert’s fees) arising out of or relating to any breach by you of the terms and conditions of these Rules, including any representations and warranties; (b) telephone, electronic, hardware or software program, network, Internet, or computer malfunctions, failures, or difficulties of any kind; (c) any condition caused by events beyond WEPLAY Music’s control that may cause the contest to be disrupted or corrupted; (d) any printing or typographical errors in any materials associated with the contest; and (e) any other losses, damages, rights, claims and actions of any kind in connection with or resulting from participation in the contest or acceptance of any prize, including without limitation, personal injury, death, and property damage, and claims based on publicity rights, defamation, or invasion of privacy.

General Terms and Conditions. WEPLAY Music reserves the right, in their sole discretion, to suspend or cancel contest at any time if a computer virus, bug, or other technical problem corrupts the administration, security, or proper conduct of the contest. WEPLAY Music may revise these Rules at any time in their sole discretion by posting an updated version.  Any Rules changes will be effective upon posting, and your continued participation in the contest after a change to these Rules constitutes your binding acceptance of these Rules. All issues and questions concerning the construction, validity, interpretation, and enforceability of these Rules, or the rights and obligations of participant and  WEPLAY Music  in connection with the  contest, will be governed by, and construed in accordance with the laws of the State of New York, without giving effect to any choice of law or conflict of law rules or provisions (whether of the State of New York or any other jurisdiction), that would cause the application of the laws of any jurisdiction other than the State of New York. The exclusive jurisdiction and venue of any action arising out of or related to this Agreement will be either the state or federal courts in New York, New York, and you agree and submit to the personal and exclusive jurisdiction and venue of these courts.

Privacy. By entering into this contest you consent to the use of your Personal Information as set out in the email you provided.  WEPLAY Music may use the name of any and all winners to promote WEPLAY Music and the contest.

DMCA Compliance. WEPLAY Music complies with the provisions of the Digital Millennium Copyright Act (the “DMCA”). In compliance with the DMCA, a Designated Agent has been established with proper documentation sent to the U.S. Copyright Office. 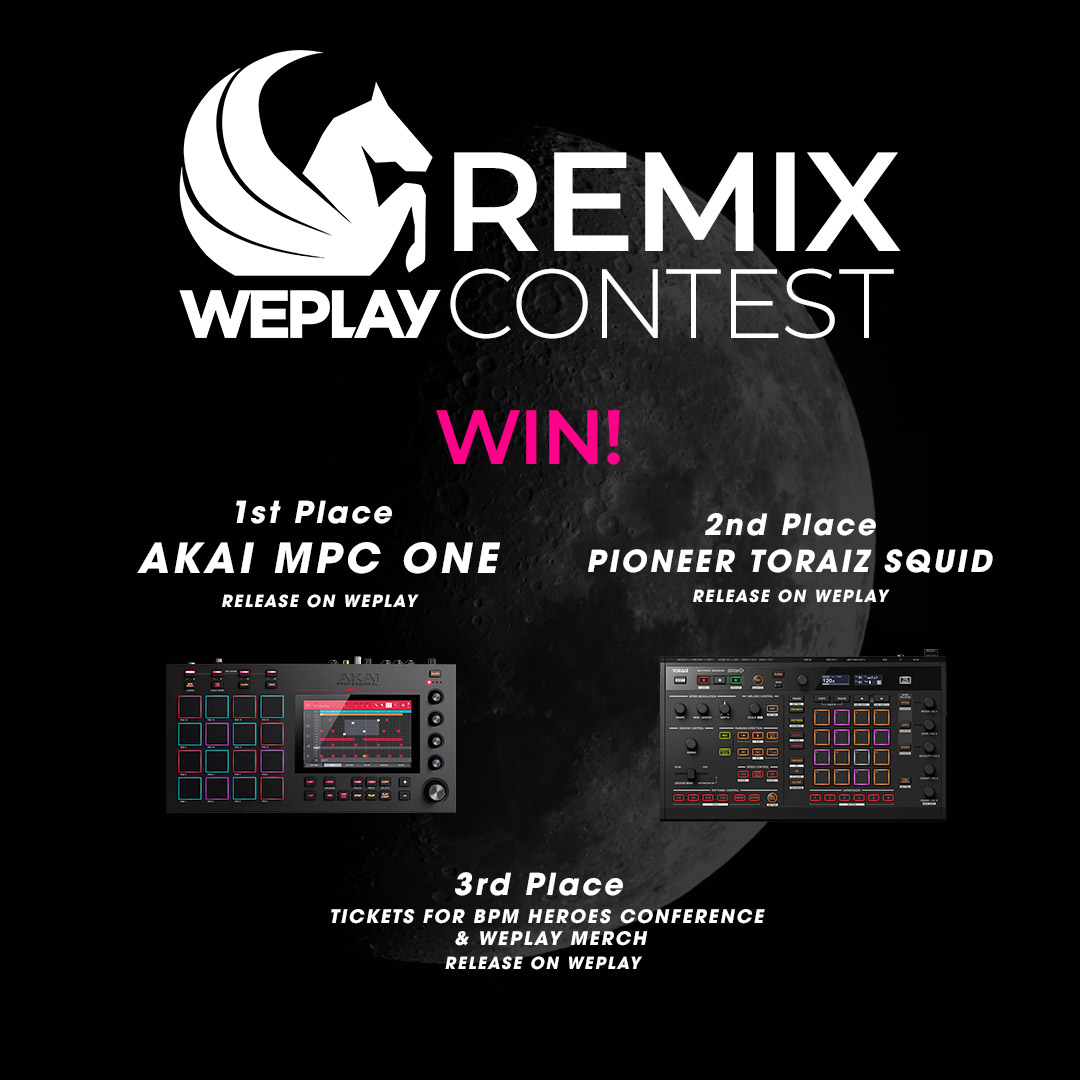